Have you ever wondered if it’s possible to have an all year tomato farming and harvesting without having to go into the expensive greenhouse tomato farming?

It is very possible.

Aside from the fact that you are going to be enjoying an all year round farming and harvesting, you are also going to be reducing the cost of running your regular greenhouse tomato farming.

Whether you are just a regular hobby gardener or you are looking at going large scale with your tomato growing, you simply can tap into the many advantages of growing tomatoes indoors under LED lights.

Essentially, as a beginner who is looking towards a very bountiful harvest but doesn’t really have the land mass required for large-scale farming, you can rely on the benefits of using LED lights to grow your tomatoes indoor.

Many LED lights offer you the basic properties needed in growing healthy tomatoes, properties florescent or other lights such as incandescent light won’t give you because they don’t have the blend of colors needed to grow perfect indoors tomatoes.

Getting the perfect LED light you need for the best result as far as using LED light to grow tomatoes indoor is not easy.

There is a lot of products in the market today that it takes only an expert to know which is the best and most suitable for this kind of cultivation.

But because we understand that this might be a really tedious task for a beginner that is why we have taken time to provide you with the fundamental and step-by-step guide needed in helping you get nothing but the best of LED lights in the market.

Growing tomatoes indoors isn’t magic, it is a process that starts with planting the right seed. This is the most fundamental of all the steps you need to learn as a beginner when trying to figure out how to grow tomatoes indoors.

You need to choose the right tomato seeds for the best result. The implication of this is best said using the saying ‘you shall reap what you sow’. Hence, bad seeds wouldn’t give you the best of tomatoes no matter how perfect the lighting condition is.

For this step, it is essential to understand that tomatoes can be categorized as determinate and indeterminate.

It continues to blossom and grows in due seasons and this is the type that is most recommended for indoors tomato growing.

As a beginner, you should understand the importance of early pruning. When you prune your tomato plants early, you expose the plant to immunity to some plant exhausting diseases. It is normal for a beginner to ask a question like, ‘when do I prune my tomato plants?’.

And the answer is simple.

Once you see the leaves and stems that are usually below the first flower turning yellow, then it is time to prune.

Also, new suckers would do more damage than good to your plants because they are capable of depriving your tomatoes of the required plant sugar and as such, remove them as well as any yellow leaves that may spring up.

Tomatoes come in a lot of varieties which include: Amish Paste, Early Girl, Big Boy, Green Zebra, Yellow Pear and many more. But in choosing the type of the variety of tomato you wish to grow, you should have all of these in mind:

Tomatoes need the right soil for proper growth and as such, the condition of the location or space you want to grow your tomatoes in must be warm and low in acidity and must have an adequate drainage system

Tomatoes are a very delicate plant and as such, they may not survive or they may experience a stunted growth if they are exposed to too cold or too hot temperature. For a steady temperature for indoors tomatoes cultivation using LED light would be the greatest idea for a preferable result.

For efficient fruit production, nothing less than eight to nine hours of daily illumination is needed for the tomato plants. And they might not receive this light indoors unless there is an adequate illumination system of which LED light remains the best of them all.

Using the best LED lights we are going to reveal shortly would help you in monitoring as well as keeping track of the number of hours required for perfect illumination.

For instance, you can expose your tomato plant between the third to the fifth week to about twelve hours of LED light after which you can increase it to about sixteen hours of daily light especially during the period between sixth to ninth week.

By the end of the ninth week, you can then reduce the hours of illumination to between eight to ten hours of daily illuminations.

General Benefit of LED light in Indoors Growing of Tomatoes

LED (Light-emitting Diodes) Lights which have been around since decades back but are mostly used as indicator lights are now more preferable in mimicking the sun rays instead of the energy consuming counterparts such as HID, HPS and even fluorescent because of the following benefits:

When considering the best LED light, most people use the prices in determining which to some people is the best criteria which also might mean the most expensive LED lights, but this is not totally true.

In helping to deceive the masses to some extent, some of these LED grow lights for tomatoes have gone the extra length in specifying the number of watts their products discharge and it is almost the case that those extra dollars are usually for the higher watts mentioned.

It is however important that watts most of these brands specify are not often what the output of the lights are. Hence, when settling for a good LED grow light, make sure you go through the product description.

It is also important you go for very good and reputable LED brands.

Also, since you are going to be using your LED lights for nothing less than an average of ten hours in a day, it is important to not settle for a reputable brand whose LED light offers a powerful full spectrum LED light system and that is capable of discharging nothing less than 300 watts.

There is also the need to pay more attention to the amount of heat the LED light produces.

The amount of heat output determines how well protected your plant would be in a long run and how durable the product.

Aside from the amount of heat a light produces, you should also make sure you don’t settle for a LED light with a Semiconductor Chip of less than 3 watts. Semiconductor chips are the cores of LED lights that help in converting electricity to light and anything less than 3 watts might not be able to provide sufficient light in the long run.

Some of the difficulties you might be faced with as far as using LED light in growing your tomatoes indoors is concerned with the need to constantly monitor the efficiency of the light system.

As LED light ages, they tend to change colors into colors that might not help in helping your plant yield to its maximum capacity. That is why it is important to go for reputable products with a longer lifespan.

After searching through the numerous brands that we have in the market today, below is the list of the best grow light for tomatoes that we can vouch for: 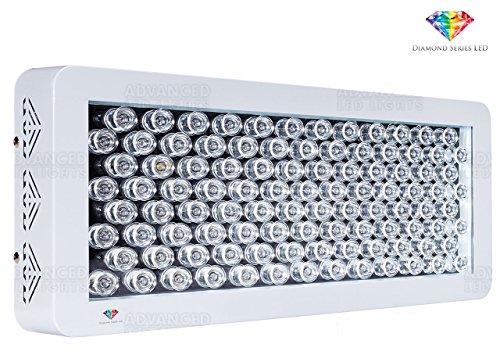 This brand is one of the brands that has all of the components of their lights made in the United States and have passed all the necessary quality compliance regulations.

With over seven years of experience in the field of LED light making, they definitely know what it means to offer quality especially with their products having a very high light intensity as well as a well-patented finned heat sink.

They also leave you with the option of choosing from ranges of fourteen colors that have been tested to meet proven results especially with their new series of grow light called ‘Diamond Series’.

If you are looking for a product you can trust and you are not really on a low budget, you can solely rely on this brand as they would give you everything a good LED light can give. 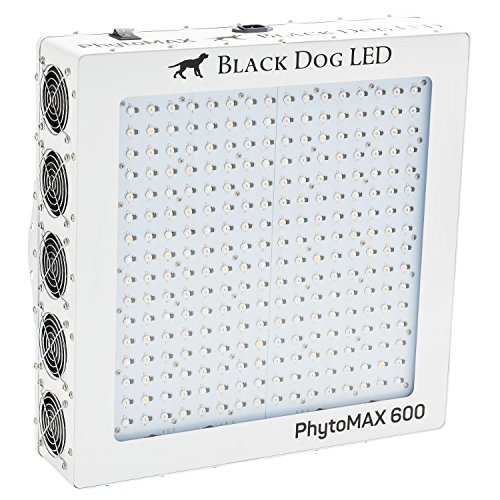 With an expected lifespan of about 70,000 hours, one cannot rate this USA made product anything less than an excellent product.

Black Dog LED offers a good dimensional lighting experience that comes with more than 250 LEDs with an actual wattage of 630 watts.

When it comes to spectrum color lighting, Black Dog has got you covered with a range of thirteen LED colors all with ultraviolet of IR features.

If you want much in a LED light especially in the area of wide space coverage, then you can go for any of the Black Dog LED lights.

They cover a wide range and you don’t have to buy so many lights for a not too big space. 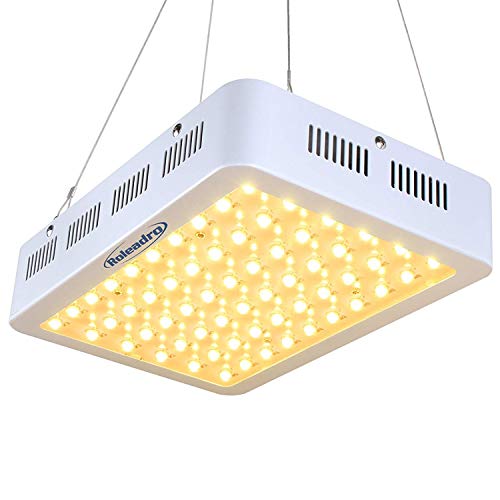 This brand has come to change the game of LED grow lights by bringing so many advantages to the table for a very affordable price that it is almost a sin to say cheap lights don’t offer much.

This light comes with a full spectrum light that emits all the necessary light spectrums at once; a perfect imitation of sunlight.

With its 3000k color temperature, your plants almost feel as though they are tapping from natural sunshine. It has a very high-quality semiconductor chip of 5 watts that guarantee perfect illumination.

If you are really low on budget and you have just a little space to grow your plants because you are just getting to start your own indoors farming, then this is one of the best grow lights for tomato seedlings. 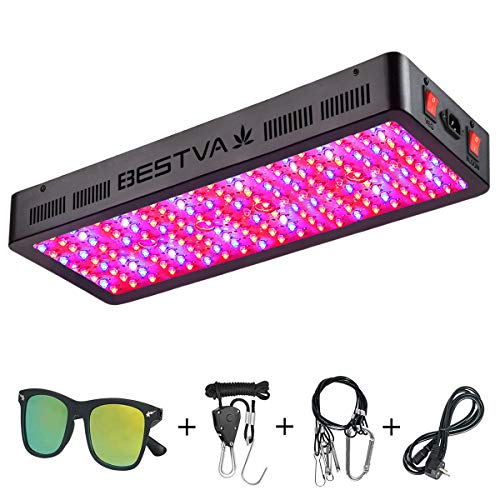 For a beginner that is looking at starting really big but doesn’t really have the means to get very expensive LED lights for indoors farming purpose, this product here might be one of the very best option to pick.

Tomatoes as earlier mentioned are really delicate plants especially during their germination stage so you cannot simply afford to get it wrong as a beginner when trying to go into a large scale tomato farming using LED lights.

However, Bestva 2000W Double Chip LED Grow light offers you a lighting system that comes with adequate canopy penetration which allows your plants to get exposed to healthy growth during their early stages. 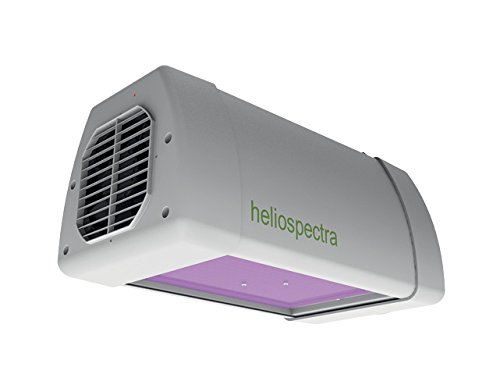 And the only reason why it is being rated fifth is that of the benefits which other brands have over it.

For example, it is very expensive, one of the most expensive of all of these LED light systems.

If you are the kind of farmer that is particularly inclined to enjoy the comfort that up-to-date technology has to offer such as being able to control the hours of lighting in your farmhouse, this LED grow light for tomatoes might not really be something you should buy.

Because any of the earlier mentioned products offer far more for far fewer amounts.

If you are not really on a low budget, however, then you might want to enjoy the other amazing features this product has got to offer.

You can never miss a thing in having an indoor farm of your own when you follow the step-by-step guide as provided in this article.

Enough of you trying to see tomato growing as something too stressful, expensive or time-consuming especially when it has to do with using LED grow lights for tomatoes.

The truth is you can never know unless you try.

You just have to start acting NOW!